I won’t go in to the convoluted reason why I needed to write this script, but I will tell you that I recently used it to convert over 540 music files (using FFMPEG) from wma to mp3. You see, when I ripped my CD’s I used the wma format (at the time a higher quality for smaller file size codec), and now I need them in mp3 format.

My first try was to do dir command (dir folderName /s > fileList.txt) from console, open the resultant text file in Notepad++, and search and replace (can you say REGEX?) to construct a list of commands to run as a batch file (again from console). This worked fine, but when I realized the scope of the project, I decided to resort to my favorite fallback, PHP.

Here is the script I generated, and it worked flawlessly (for me). Feel free to use it as you see fit. If you like it (my script), give my blog props or e-mail me.

That’s all there is to it. Change the folder location as needed, run the script, save the page as text. Now change the extension of the saved text file to .bat and invoke from the console. Assuming you have FFMPEG in the environment path (I do), it should start chugging away. After the batch file is done, verify the files are where they should be, and delete the unneeded (wma’s) if desired.

I was researching how to make a JavaScript countdown timer for a personal webpage, because that’s the only way to go if you want interactivity (client-side scripting at its best), and I thought, ‘how can I do this in MySQL?’ Researching that a bit, I ran into a lot of similar minded queries on forums. So, I decided to write some sql.

Below is one of the versions of sql that I came up with. Note that there are many ways to do the same thing in sql, so my script may not be consistent (even to itself). Hopefully, the comments are sufficient to explain what I was doing.

All Your Base Are Belong To Us

So, I was out riding my bike today and ran across this lovely little fellow: 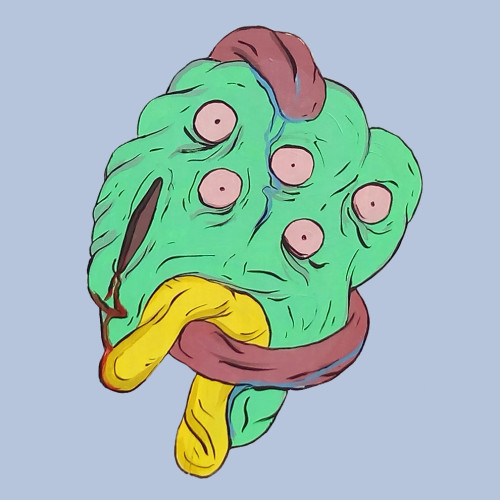 This appeared to be painted on the utility box (not a decal). I have no idea who designed or painted this, but if you can prove it’s yours, I’m more than willing to give you credit. Fairly cool, by the way!

After thinking about it a while, I believe I’ve seen this on a sticker (or somewhere) before. However, this was hand painted, and not a mass produced sticker (or the likes).

Cigarette Butts In The Wild

So it was pretty windy yesterday, and while riding my bike (undisclosed location) I noticed two cigarette butts (one white, one undisclosed color) running for their lives (as though the wind was chasing them). I wanted to ask them where they were going, but they were in such a hurry, I thought it best not to interrupt them. Born free …

Posted in Off Thoughts (Off as in Not Quite Right) | Tagged outside the box, writing | Leave a comment

No WMC No Windows 10

With a push to get everyone back on the Microsoft wagon, Microsoft is offering Windows 10 for free to Windows 7 and up users. I was initially excited while simultaneously worried. I mean, nothing in this life is free. There’s a catch. You know it, I know it. However, I was still on board for the upgrade until I found out that Windows 10 will not contain Windows Media Center.

I guess I’m one of the few to use it with a cable card and decoder box (to match my cable provider). I’m not sure why it didn’t catch on (wasn’t more popular). I can’t see it being the price, because after the initial investment in the decoder box (about $100.00), the cable card only costs about $2.00 per month to rent. That’s one-fifth the cost to rent a cable company converter box (so that means I broke even around a year after purchase). I can’t imagine it’s the lack of features. I can set up my favorite shows to record automatically (series record), watch live TV (don’t do that very often–can’t stand commercials), search for shows to record via search or by manually perusing the station listing (up to 2 weeks in advance), as well as watch streaming TV from the likes of Netflix. Too difficult to set up for most, I guess. It’s too bad.

Working With XML/XSLT, JSON, And PHP

So, this tale, which for your sake I will attempt to make brief, is typical of my experiences in web development. As one of my old bosses used to say (and I’m paraphrasing), “if there’s a hard way to do it, you’ll try that way first.”

To begin, I have as my personal homepage, a calendar page that is scripted with PHP and MySQL. The calendar not only displays date information, but also displays things like birthdays, Sun and Moon information, bills, and a to-do list. As I constantly visit weather sites I decided it was time to bring the weather information to my calendar. Searching an API link site I found that the NOAA provides just what I needed: NOAA Weather API. While it was fun setting up the SOAP call, the resulting information (returned) was in XML format. Not the biggest fan of XML, but it’s what we’re given to work with in this situation.

Fast forward through scripting the SOAP call, caching data locally for X amount of hours (NOAA would appreciate not being queried over once per hour), writing the initial XSL for XSLT, and wrapping it as an object for display in my calendar. Everything seemed to be fine till I decided to look at my calendar with my smart phone. Turns out the smart phone (an old one) running Android 2.2.2 wouldn’t translate the XML in it’s built in browser. I have no idea if newer phones will deal with XML (maybe with a different browser?), but that didn’t matter to me, it has to run everywhere.

Researching the subject someone pointed out that whenever possible all XML transformation should be done server-side. I understood what he was talking about, browser compatibility issues being the bane of every web developer, but that adds to server-side load, not to mention the fact that if done server-side, there’s not much advantage of using XML in the first place (for information transmission). One of the perks (perquisites) of transmitting data in XML format is being able to display it in virtually any manner with a simple change of XSL (because all of the data is already there).

Okay, so now I’ve set out to do the transformation server-side. Great. Not that big a deal. The one sticking point was that I needed to include the following line (which took some research):

That and a couple other changes to my PHP script, and everything was being delivered as (X)HTML to the browser. Even works on my cell phone. Great, score one for me!

A while goes by and I decide to change the SOAP call to get 12 hour data as opposed to 24 hour data. That would help to narrow down when rain, for example, was to be expected. This turned out to be a lot more work once I jumped back into the XSL(T). You see, the data is presented in 12 hour blocks, sequentially, in one section, day – night – day – night, etc., and grouped in another, high temperatures (group one) and low temperatures (group two). While this may not have presented a problem to someone more adept with XSL, it was a stumbling block for me, to say the least. After beating my head against the wall for some time, not sure how much exactly, I did get it to work … mostly. And to be sure, had I not decided it simply was not worth my effort, I would have hammered out the remaining issues. However, it suddenly dawned on me, to heck with XML, convert it to an array, and then I can do whatever I want in PHP.

Initial searches turned up suggestions to turn it into JSON. I was okay with that. I mean, javascript is cool, and besides from there I could convert it to an array if I still wanted. Unfortunately, some of the data I needed was in attributes of the XML, which simple code, like below, would not get. Mostly worked.

Further research and several failed attempts (read that as code did not work) and I happened across a PHP class at: XML To Array With PHP which works. Include the class and add the following, and I was off to the races.

tldr; XML is overly complicated and is not as useful as was originally intended (my opinion). XSLT should be done server-side. Better yet, convert XML to JSON or an array (for PHP consumption) and life will be much easier.

So, it’s raining off and on, and taking a moment’s break from my usual tasks I decided to do something different. Looking at the weather map to see the rain occurring in the area always shows blank corridors. Obviously, these blank areas are either deliberate or caused by obstruction (radar being line of sight and all). Anyway, a screengrab and a couple stroked paths later and I have this: 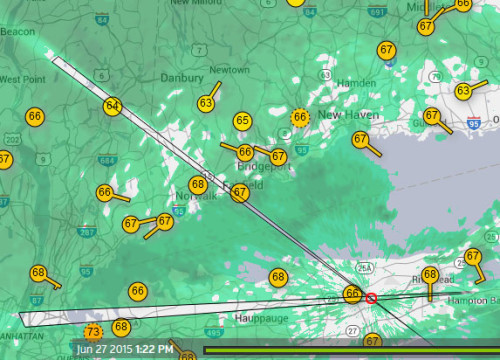 A quick look at google maps and the location appears to be the NOAA station here:

NOAA as per Google Maps

Posted in Fun With Photoshop | Tagged critical thinking, outside the box, photoshop | Leave a comment

New Horizons is scheduled to arrive at the PLANET Pluto (don’t give me any of that dwarf or minor crap) on:

Kind of sad that I thought it would be easier to write the query than count the days manually, huh?

WordPress likes to help by adding weird apostrophes, so:

Today a plumber’s truck stopped at a neighbor’s house. The graphic on the back door sent my mind into overtime (as per usual). Here is the original: 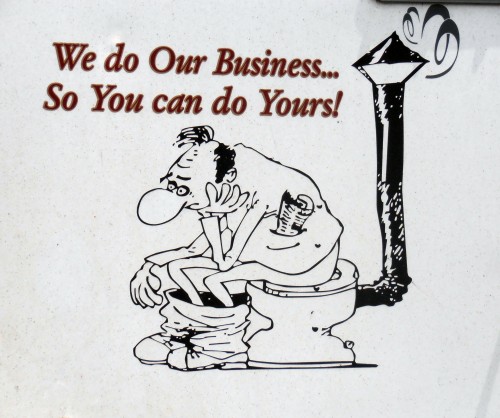 Here is one of the ideas that popped into my head: 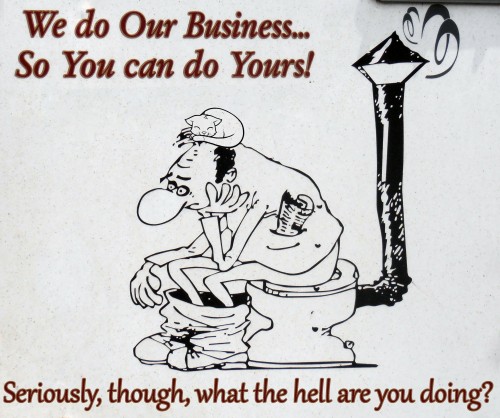 I had other ideas, but I haven’t gotten around to making them yet. Photoshop, you gotta love it!

Posted in Fun With Photoshop | Tagged outside the box, photoshop, picture | Leave a comment

I finally got around to seeing the movie today (probably one of the last to see it at the theater). To be honest, it surprised me that it was in the theaters so long. I guess it struck a cord with some people. I guess.

Anyway, I could make a long list of issues I had with the movie (the script), but I’ve condensed it down to this:

Seriously, did the person that wrote this just give up or go missing (thereby forcing the movie execs to use a homeless person to finish writing the script)?

In spite of my gripes (and there are more that I shan’t list), I enjoyed the movie. Shouldn’t win any awards, but entertaining.